In my previous post I talked about my time working on software for Knox and Shelby Counties in Missouri.  That was all historical, and probably not very interesting to anyone besides me.  In this installment I’m going to reminisce about the actual computers.

Knox County bought their computer first, and got a Radio Shack Model 16b running TRS-XENIX.  Shelby County followed, purchasing a Tandy Model 6000 computer, which was nothing more than a rebranded Radio Shack 16b (after all, Tandy owned Radio Shack).  I suspect the rebranding was intended to indicate that the 6000 was a more “upscale” computer, separating it from the TRS-DOS-based Radio Shack computers that were then popular in businesses (at least in my area).

The 16b/6000 was an oddball machine.  It resembled the other Radio Shack computers of the era, with 8″ floppy disc drives and large external hard drive boxes.  Here’s a copy of an original ad for the 16b: 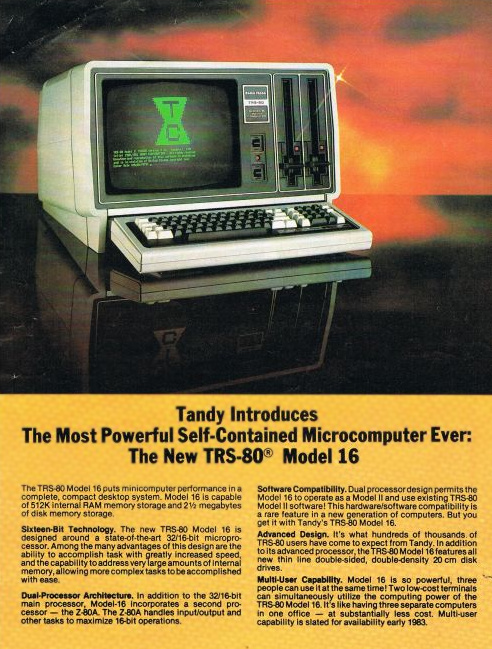 The dual processor architecture mentioned in the advertisement was one of the weird features.  The main processor was a Motorola 68000 running at 8 MHz, with a second Zilog Z80 processor that normally served to manage I/O devices.  I don’t know exactly what that means… that is, what I/O was directly managed by the Z80.  Was it all of it?  Or just some devices?  What I do know is that the 16b could boot TRS-DOS on the Z80, leaving the 68000 offline, or it could boot TRS-XENIX on the 68000 with the Z80 in that subordinate role.

TRS-XENIX was an interesting case.  Both computers I worked with came with the early version, based on AT&T Unix Version 7, and I (rather painfully) upgraded both to the later XENIX 3.0, which was based on AT&T Unix System III.  I don’t even recall what the changes were, but I remember liking the upgrade.

For those not “in the know,” let me boil it down.  AT&T/Bell could not sell software at that time (because of their monopoly status), so the Unix OS could only be bought from someone else who licensed it from AT&T.  No, that doesn’t make sense to me either.  They couldn’t sell it to you or me, but they could sell it to some company for resale.  Anyway, Microsoft licensed Unix from them, but because they couldn’t use the name “Unix” (why?), they called it XENIX.  Microsoft then licensed XENIX to Tandy, which rebranded it TRS-XENIX.  Wikipedia says that Tandy was at that time the largest (in terms of count of units sold) reseller of Unix.  I can believe it.

By the time XENIX 3.0 came out, the copyright headers in a lot of the scripts now included a new player:  SCO, the Santa Cruz Operation.  I see on Wikipedia that SCO and Microsoft worked together to create a XENIX for the Apple Lisa in 1984, and I assume that work fed back into the upgraded Tandy XENIX.

The two computers I worked on each had two remote serial terminals, DT-1 Data Terminals that appear to have been stripped-down early-model TRS-80 computers; they still had bays for floppy drives, for example.  I think Knox County’s computer had a pair of the 15 MB hard drives, while Shelby’s later model had a single 35 MB hard drive; my memory may be a bit faulty on the exact details, but I do know Knox had dual drives.  Both counties had LMP-2150 printers, which were rebranded Printronix printers which had astounding lifespans.  The buttons on the cover (which cover was apparently made for or by Tandy) were membranes, and they tended to break down over time, but the printer engine was bulletproof.  Also very loud.

Possibly the most amazing thing to me now was what these things all cost.  Here are the prices I’ve been able to find for the bits and pieces I remember being installed at Knox (the actual price they paid probably varied).  I’ve added adjusted 2015 prices (the latest year I can find inflation info for).

WOW.  And they let 18-year-old ME touch it.  What WERE they thinking?

The 16b probably had half a meg of RAM, and yet it managed to run a fully functional Unix system as well as application software.  (Oh, yeah, I didn’t add in the software price above… no idea how much that would have been.)

Man, that was a long time ago.

My first paying job working with computers was with the Knox County, Missouri Assessor’s Office.  It so happened that, in 1983 when I was starting college, my next door neighbor was the county assessor.  He was someone I had always known, a local businessman before he ran for the office; his job, on the other hand, I knew nothing whatsoever about.

He called me up one night and asked me if I could “help out” with their computer.  This was during the reassessment (in fact, let’s capitalize that as “The Reassessment”).  I don’t really remember the whole history, but I can tell you that all the counties in Missouri were performing fresh assessments on all their real property.  It was a huge job, and the State Tax Commission was providing money to assist with computerization of the data.  It had never been done in most counties before that, so it was kind of a “Wild West” situation, with lots of people who knew a little about computers jumping in and trying to get something done.

I knew a little about computers.  It was my freshman year in college, and I had experience with Apple II computers running DOS 3.3.  That was about it, actually.  But I said sure, I’ll do what I can.  I spent a bunch of evenings in the office learning about their computer on my own before I ever talked about getting paid.  Still, they were probably nuts to let me do it.

But it seems the salesman who sold them the computer had done all the programming.  Is that alarming to you?  It should be… little as I knew, I still knew more than he did.

I spent 1984 just getting familiar with the programs the salesman had written (actually, the whole assessing-collecting system was put together on top of Profile 16+, the Tandy database software they had purchased with the computer) and writing or revising reports, screens, etc.  It took me until the end of that year to really understand what he had done wrong, and that all came back not to technology but to understanding (or not understanding) the offices.  I pitched a rewrite to both counties, and got the go-ahead to do it; it took me most of 1985 to get that done, working part-time while going to college.

I should mention that I was working for the Collector of Revenue in both counties as well as the Assessor.  Part of the issues with the software system the salesman wrote was that it didn’t adequately separate the two offices (in each county) so that each office could work with the data only half a year, and the Collector couldn’t keep unpaid (delinquent) taxes on the computer from year to year.  This was one of the first major changes I made.

The software remained in use in Knox County until 2012, thus getting about 27 years out of the rewritten system.  Seriously.  Shelby County bailed earlier, around 2008 if I recall correctly.  When the old computers got too old, they switched to a network of DOS PCs running filePro+, and I transplanted all the data from old to new.  When those computers got old, they got Windows XP computers and ran the program in DOS windows.  It was the advent of Windows 7 that finally spelled the end for the old program… though you can make DOS programs run on Windows 7, it’s not easy, and it really sucks trying to network them.  By that time the Shelby Co. Assessor had finally moved away from the old program, and the Knox Co. Assessor only used the personal property parts (having long before switched to a full appraisal system from another vendor) but the Collectors in both counties still used that old program.  I’m happy to say I wrote the replacement programs for both counties (though perhaps not surprisingly they aren’t quite the same program…)  It’s my hope that the new software will have the same “legs” as the old, giving decades of service before needing replacement again.

Wow, that’s a lot of writing.  I had planned to “talk nerdy” here, but I think that will wait for another post, in a few days perhaps.